You must have heard about 'Bol bam rath yatra' from Namrup to Tinsukia. The kawariyas (or Kanvarias) travel the entire distance to pray in Shiv Sham temple located in Tinsukia in Assam state of India. The road is crowded with kawariyas who sing and dance to devotional music playing in the background. They carry colourful sticks and some also wear bands on the forehead. The whole atmosphere is charged with devotion and prayer.

Architecture of Shiv Dham in Tinsukia

Shiv Dham is dedicated to Lord Shiva and is famous for its architecture. What is special about this temple is that it is actually situated in the middle of a Water Kund! The temple looks amazing during sunset when the orange rays of the sun fall on it and highlight the carvings and design of the temple.

The Shiv Dham temple is built on a sprawling area. The temple comprises of many pillars, all beautifully carved. Lovely gardens around the temple add to its beauty. A coloured statue of Lord Shiva (in the sitting posture) with his trishul rests in the centre of a pond inside the temple premises. The temple was built by devotees of Lord Shiva in Tinsukia district.

How to Reach Shiv Dham Temple in Tinsukia

The temple is located 1 kms. from Tinsukia Bus Stand. It is situated in the centre of Tinsukia city and is accessible easily from any part of the city. You can take an auto rickshaw or cycle rickshaw and reach the temple. The walls of the temple have intricate carvings. The idols inside the temple too are sculpted splendidly. The Airport nearest to Tinsukia is Dibrugarh airport (47 kms.) at Mohanbari in Dibrugarh.

Tourists visit Shiv Dham temple throughout the year. The pavilion of the temple is spacious with numerous pillars to add to its beauty.The atmosphere around the Shiv Dham temple in Tinsukia is very serene. You would love to just sit and meditate.

The Kanvaria Procession during Festival in Tinsukia

Kanwar (or Kanvar) Yatra, also known as Kavad Yatra is taken by devotees of Lord Shiva annually during Shiva Rathri festival. These devotees of Shiva are popularly called Kanvarias. The Yatra takes place in the month of Shravan or Saawan (July-August). 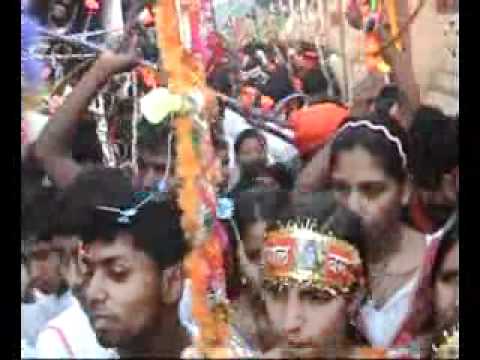 These Kanvarias come in large numbers and fill trains, buses and the entire city roads! This is because they are joined by devotees from other neighbouring states too. These devotees carry a single pole made of bamboo. This pole is called kanvar from which two equal loads dangle at the two ends. The kanvarias carry the pole on one or both their shoulders. They also carry covered water-pots. The Yarta or procession is considered as an important pilgrimage.

The devotees even observe fast on Mondays during this month of Shravan and after reaching the temple, they take bath and perform abhisheka (anointing) Shivalinga which denotes thanks giving to Lord Shiva. Most of the members of the procession are males. However, few female devotees can also be spotted sometimes. These kanvarias are saffron-clad pilgrims who cover the entire distance on foot.

For maintaining law and order, the kanvarias are banned from carrying hockey sticks, trishul, lathis. Even loud music is not allowed. They have to follow traffic rules as not to disrupt normal traffic on the roads. They are also assigned a particular route which they cannot stray from. The purpose of such procession or yatra and reaching the Shiva temple is to seek moksha (salvation). Tourists take pictures of such devotion and enthusiasm.

If you visit Tinsukia, do visit the temples in this city which include Shiv Dham temple and also the popular Bell temple where you have to tie a bell on a tree if your wish is fulfilled. Take this spiritual journey and experience the fervour of devotees in Tinsukia!